Burj Al Arab is a luxurious and one of the most expensive hotel in Dubai (United Arab Emirates). Burj Al Arab is built on an artificial island and is managed by Jumeirah Hotel Group.

The hotel is connected to the mainland by a private winding bridge, and is located 920 feet (280 m) from Jumeirah Beach.

39% of the total height of the Burj Al Arab hotel is made up of non-occupied space, and the structure of this hotel is designed to resemble a ship’s sail which looks quite beautiful.

Apart from this, there is no other 7 star hotel? So in this article today you will get the answers to all your questions and we will see this Burj Al Arab Hotel from inside that the hotel is such that it is world famous.

The Burj Al Arab Hotel was built and managed by Canadian engineer Rick Gregory of WS Atkins and designed by Atkins, a multidisciplinary consultant led by architect Tom Wright.

The construction work of the hotel was completed in 1999 which was started in 1994 and more than 2000 workers were employed for the above construction of this hotel. 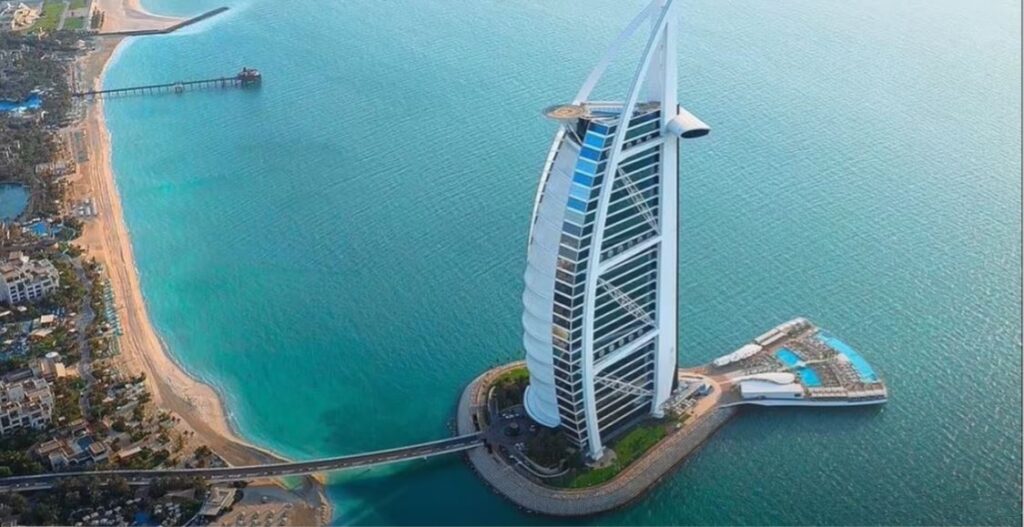 This hotel was built by Concor and Al Habtoor Engineering, whose earlier name was Murray & Roberts, which is from South Africa. The Burj Al Arab Hotel was opened on 1 December 1999.

The helipad at Burj Al Arab was designed by Irish architect Rebecca Gernon and is located on the top of the 59th floor of the hotel.

Complex engineering was employed to create the hotel’s features, in which 130 feet of concrete pillar was thickened in the ground.

It took 2 years and cost several million dollars, the entire hotel was completed from 1994 to 1999. Which took 5 years to be made. 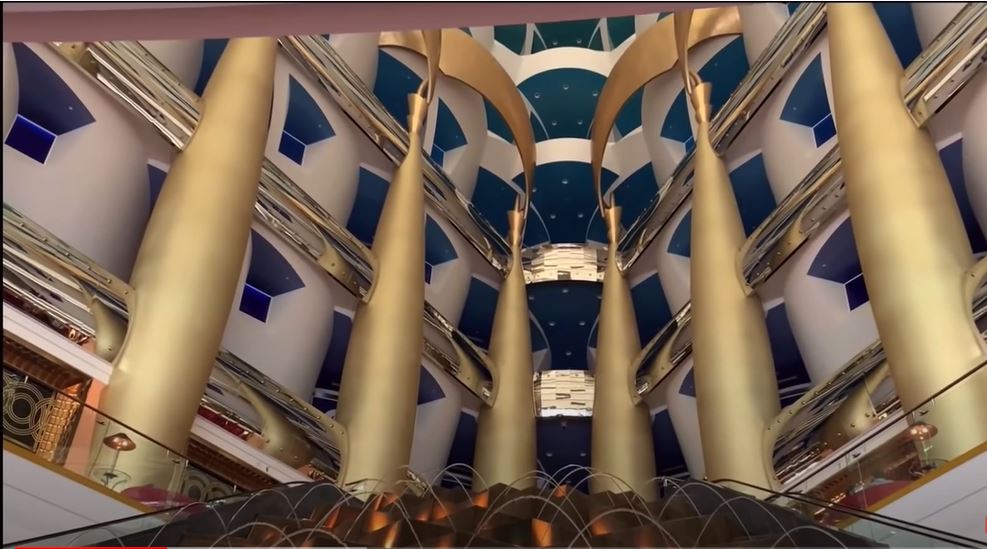 A layer of large rocks was formed on the ground, which is surrounded by solid honeycomb, which serves to protect the foundation from erosion.

As soon as you enter inside the hotel, you will see a big fountain in the middle of which the water goes up to more than 130 feet above the ground.

Golden marble has been used in the waiting lounge and many color patterns and text have also been used, on the front side you will see stone poles, on which 24 carat gold has been placed. 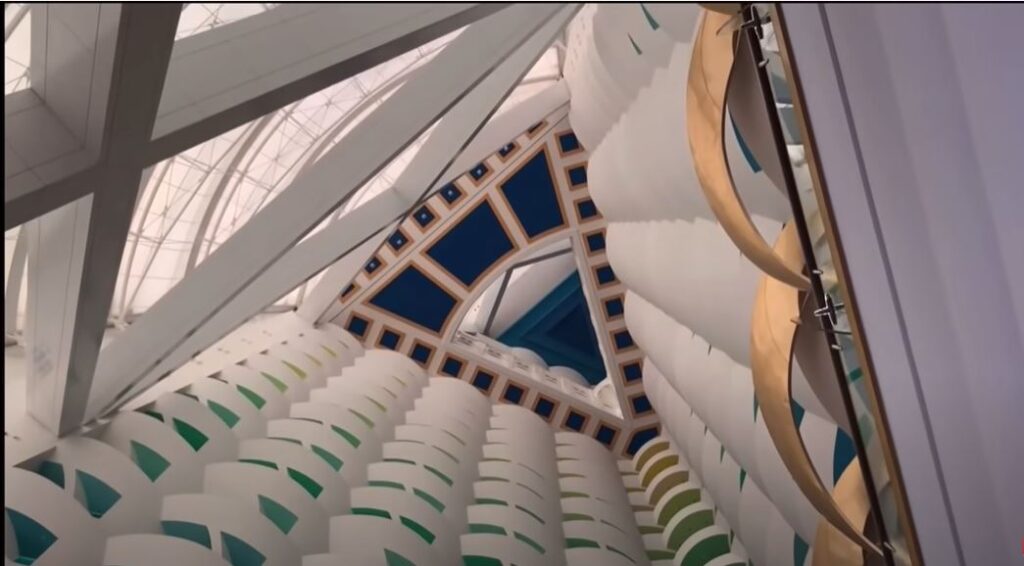 The atrium in this building is 590 feet (180 m) long, the north facing 18-story atrium is surrounded by tensioned 12 individual form and 2 layer membrane panels.

9000 tons of steel has been installed in this hotel. The world’s largest atrium is also in Burj Al Arab hotel.

Given the height of Burj Al Arab, it is the fifth tallest hotel. in which comes first; JW Marriott Marquis Dubai, Gevora Hotel, Rose and Rayhaan by Rotana and Four Seasons Place Kuala Lumpur.

By the way, the Burj Al Arab is the third tallest hotel in the world if mixed-use buildings are removed from the list.

Whose height is more than 600 feet, and wherever you see gold color in the whole hotel, you should not take it for granted that gold is polished on the object, it is actually gold.

So much gold has been used in this entire hotel that if that gold is removed and if it is put on the building of this hotel, then it will cover the hotel up to 12000 square feet.

only one bed room: 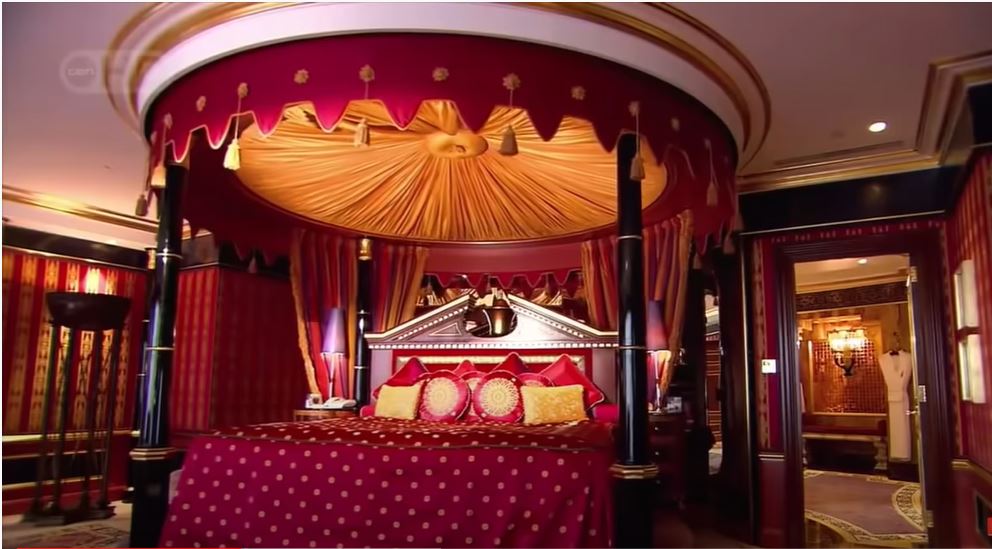 The hotel has only 28 double-storeyed floors and has 202 bedroom suites. The largest suite at Burj Al Arab is spread over 8400 sq ft and the smallest suite is spread over 1,820 sq ft.

The hotel room is kept in different category and the price of each room is different.

If you book only one bed room, then it costs more than $ 1000. In this bedroom, you get to see the luxury view outside the hotel and you will find all these things in the bedroom. 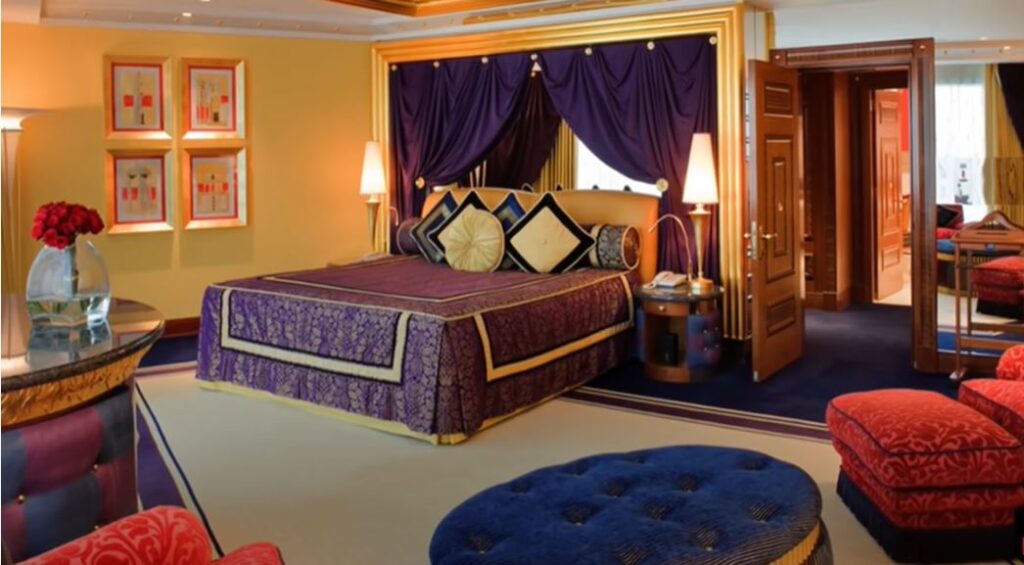 If you book a room with 3 BHK bedrooms, then it costs more than $ 5000, in which you can stay with your family. At most only 6 people are allowed in this room. 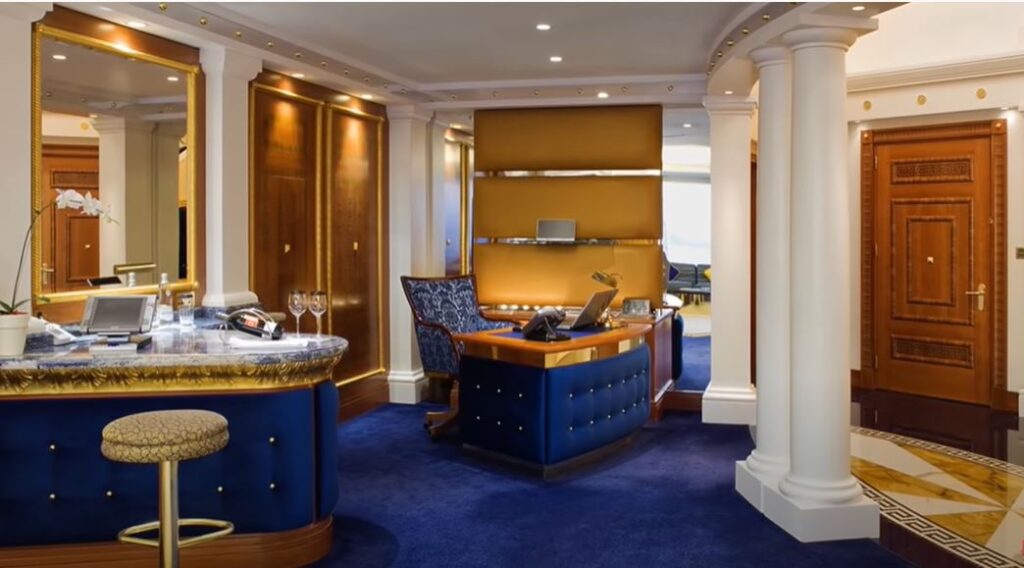 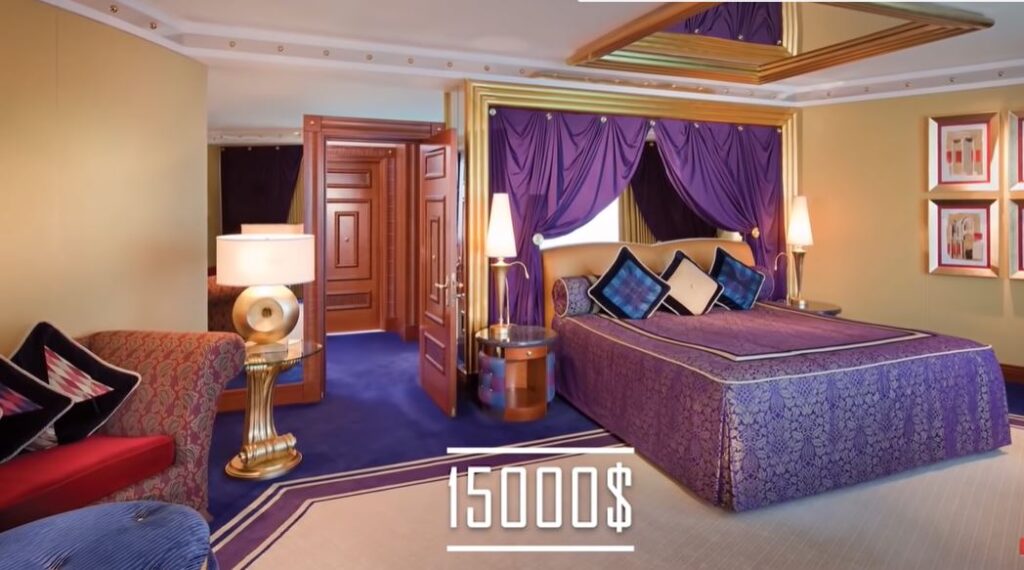 Next Bedroom is the second most luxurious bedroom in the hotel, priced at $ 15000.

You will get 2 bedrooms, 2 bed sets, and 2 mini bars, a library where you will find all the famous books in the world and 4 types of shower are installed in the bathroom. 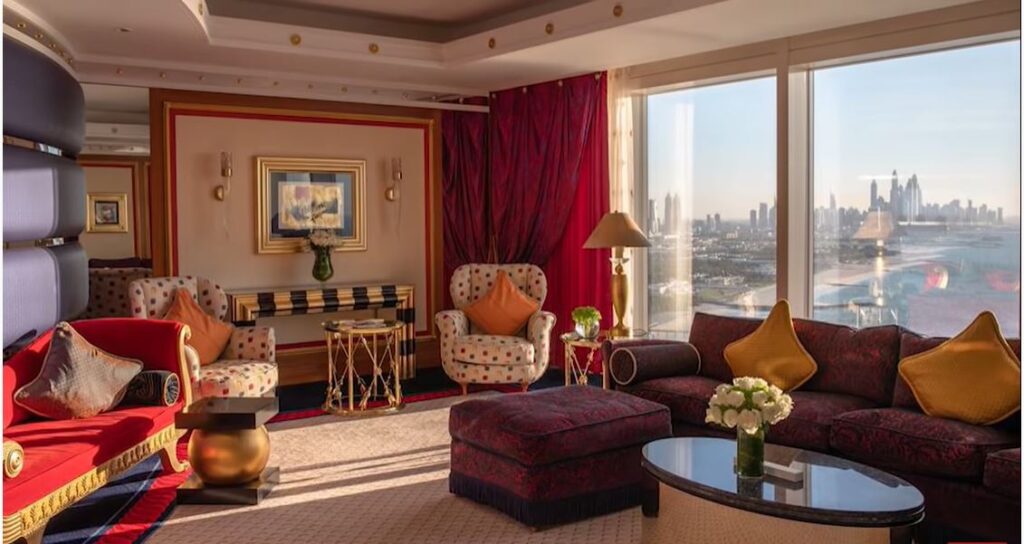 In this hotel, as soon as you enter your room, new Harman tool kit bag and perfume are kept in the bathroom.

In this bedroom you also get a dining table and 1 open living space for 6 private people, where you can see the view of the spring outside.

So now let’s talk about the most expensive room in this hotel, all the rooms you have read about till now were the normal rooms of this hotel.

The most luxurious bedroom in the hotel is priced at $ 24000 in which you get 2 bedrooms spread over 8395 square feet.

There is also a private lift to reach this room. With which you can go to any floor of this hotel. And the beds that are in it also move around. 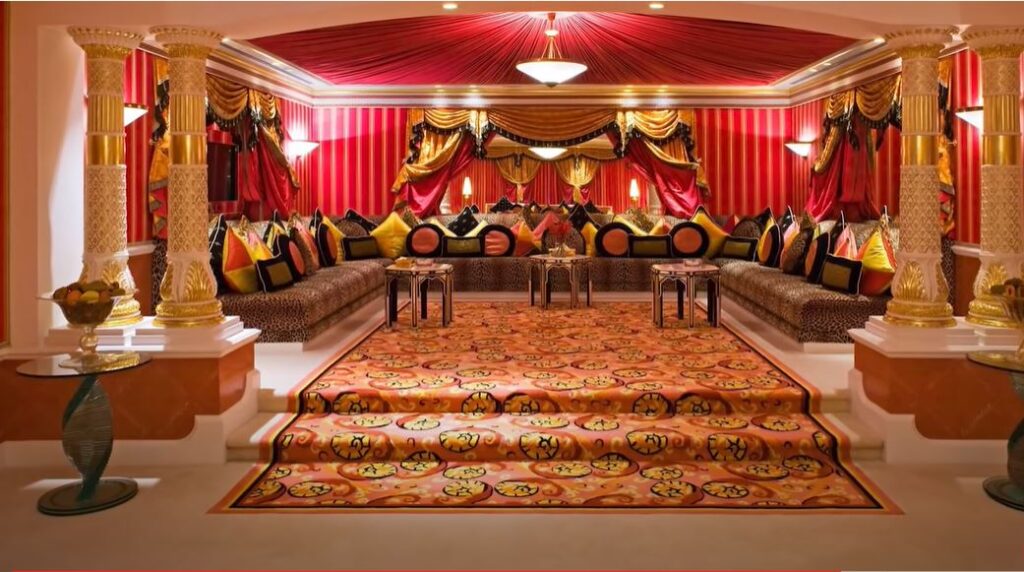 Apart from this, you get 2 bath tubs, 5 types of showers, private theater, workspace and an ipad, so that you can control all the lights, temperature, T.V, doors of your room in one place.

You are also given a personal butler, whenever you need anything in your room, you can tell your butler by calling him personally. 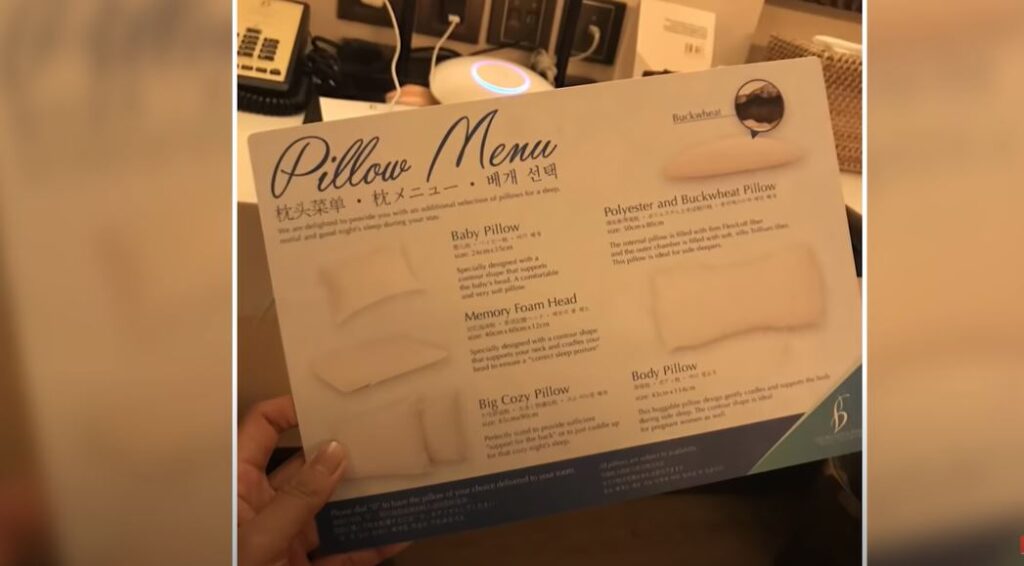 If you are feeling uncomfort with your pillow, you also get a menu. In which 17 types of pillows have been kept. From that you can select any pillow according to the size, shape, thickness.

This hotel has 9 bars and 9 restaurants. There is also an ultra luxury spa and a fitness center and the 18th floor of the hotel gives you a view of the sea.

In 2008, Burj Al Arab held the record for making the world’s most expensive cocktail, which is also recorded in the Guinness of World Records.

You will not get to see this view from any hotel in Dubai. There is a luxury platform spread over 10 thousand square meters below the hotel, which has 2 swimming pools. 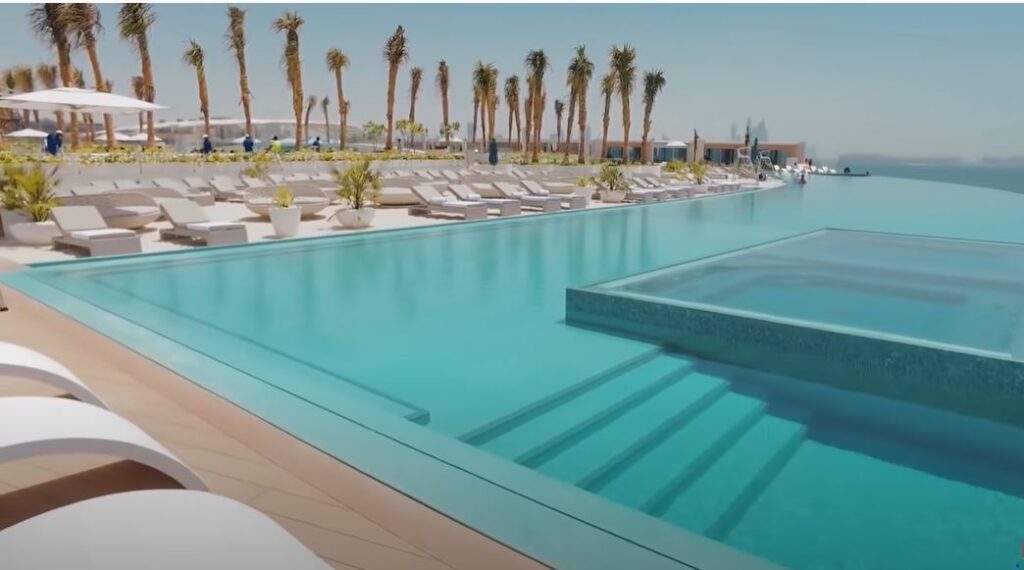 And you must have heard in many places that this is a 7-star hotel, the story behind this is that once the journalist of the UK had come for a best trip.

And he was so impressed with the service of this hotel that he gave an article in the newspaper the next day with a 7 star rating of this hotel.

Since then, people started to know this hotel by the name of 7 Star Hotel. 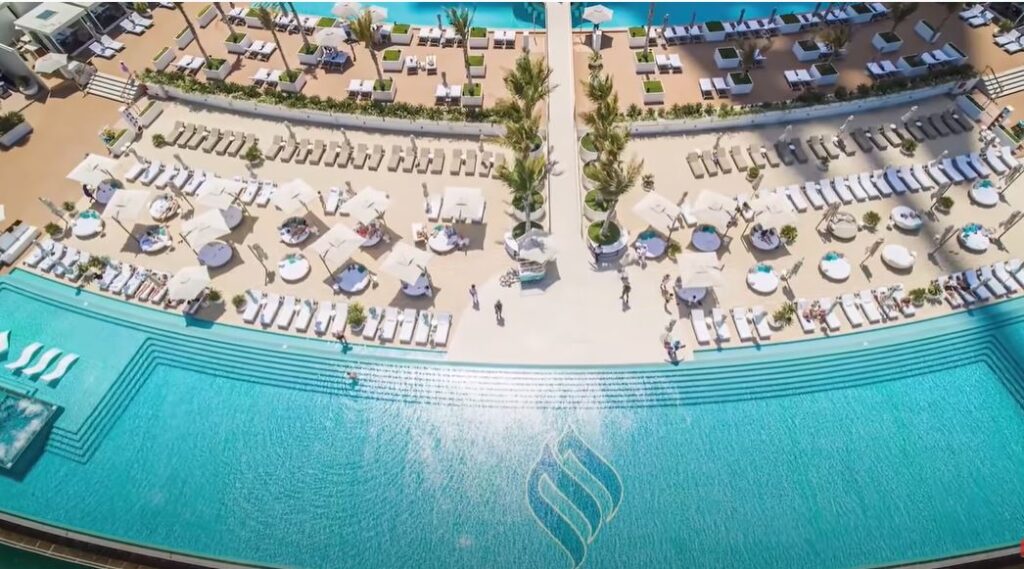 The design of the building of this hotel has been kept in such a way that the cloth used to be used in the ship / boat in the earlier times, has been kept of the same shape.

There is also a helipad on the top floor of the hotel.

The height of the building of this hotel is 321 meters or 1054 feet, which is standing on a bridge made of 250 concrete. These poles are thickened to a depth of 148 feet in the ground.

The entire building is of 56 floors with 202 rooms, and 18 lifts have been used.

Read Also: 5 Most expensive currency in the world, Dollar does not come anywhere